The solar-powered flying bicycle future that never was 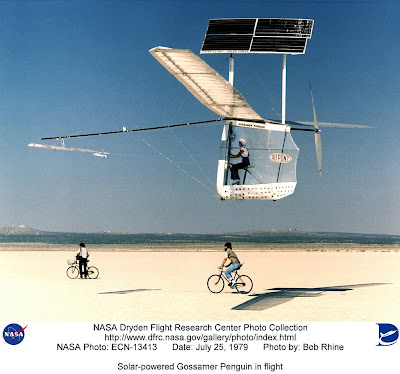 When I was a kid we may have moved past flying cars as the future of personal transportation, but we were actively pursuing solar-powered flying bicycles. The original pilot of the above bike was about my age (in 1980), though he is not the dude in the cockpit shown.

There are obvious difficulties associated with flying solar-powered bicycles as a useful mode of transport, and in today's political climate bikes are considered a socialist attempt to limit freedom, so I don't expect NASA to be pursuing these types of cool things (that's for DARPA). But those days of economic malaise in the US featured some pretty groovy ideas about the future for us kids. Little did we know.

I know solar is very interesting topic to learn.Its nice.As of now, solar power and solar related devices are expensive. But it may be reduced if most of the people start using it. Let us see the future of solar power.