(via Jalopnik and the Telegraph)
The new presidential limo has many safety features. One of them is that the only window that goes down is the driver's, and it only goes down three inches in order for the driver to "pay a toll or talk with Secret Service agents running alongside." Maybe he's planning to usher in an era of congestion pricing and will lead by example, though I expect he'll want to get an EZ Pass transponder rather than use tollbooths. This is a guy who won't have to stop for a red light for at least the next four years. You'd think they wouldn't need the driver to "pay a toll."
Posted by Unknown at Wednesday, January 21, 2009 1 comment:

We will soon all drive flying cars 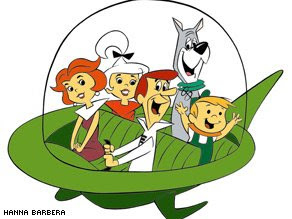 The first flying car is going from London to Timbuktu. I doubt this will actually usher in a new era of personal transportation. I'm a bit disappointed that the vehicle is less Jetson's and more schlep car.
Posted by Unknown at Friday, January 16, 2009 1 comment:

Congestion pricing is a politically unpopular but very effective way to reduce traffic congestion. While technological applications for administering road tolls used to be a major obstacle for implementation of pricing programs, this is no longer the case. Companies such as IBM invested a great deal of time and money developing new tolling technologies, and now they want to sell them.

I was surprised to see an IBM ad during a NFL game promoting their congestion pricing technologies as part of their Smart Traffic program. (I suspect this was the first nationally televised ad arguing for widespread congestion pricing.) The ad featured all the benefits of congestion pricing but somehow forgot to mention that drivers will have to pay for road space. Rather IBM is promoting tolls as "smart" roads. It's a clever way of phrasing the applications, though I doubt it will increase political support for tolls.

Here is the overview of their argument for smarter roads in the future. They again forgot to mention that drivers will actually have to pay money to get on the roads.

"Clogged roadways need new approaches
Next time you're stuck in traffic ground to a halt, think about this: as smart as our cars have become, our roadways are about to get a whole lot smarter.

It's certainly needed. Cities everywhere are battling an increase in demand and an inability to build sufficient infrastructure to cope. For example, in the U.S., as population grew nearly 20% between 1982 and 2001, traffic jumped 236%.

In Stockholm, a new smart toll system has reduced traffic and carbon emissions by impressive percentages.

In London, a congestion management system has lowered traffic volume to mid-1980s levels.