You just can't hide all the parking in a fake mountain 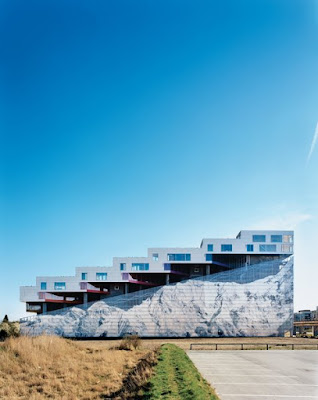 The latest Planetizen Newswire linked to this article in Dwell magazine that describes how one architectural firm addressed the problem of residential parking requirements. As you can see from the picture (taken from the Dwell site), there really isn't any good way to blend parking into that development. The zoning requires a 2:1 ratio of parking to living space, so that's about four acres of parking space to about two acres of living. You can see how such requirements harm urban design and encourage driving. That's not exactly a "walkable" development.
Posted by Unknown at Thursday, August 06, 2009 1 comment:

If Robert Moses really had his way with New York 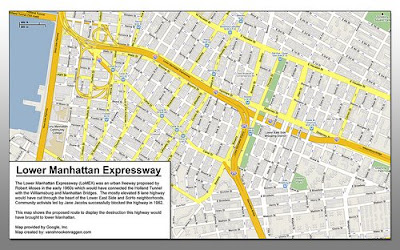 Since there is a new book out about the fights between Jane Jacobs and Robert Moses, it's a good time to revisit the Google maps view (put together by vanshnookenraggen) of what NYC would look like if Moses had his way.
Posted by Unknown at Wednesday, August 05, 2009 1 comment:

This story from the NY Times provides some details about how pervasive cell phone use is by cab drivers, even though any usage has been outlawed for a decade. I can attest that more often than not the cabbie is using the phone while driving. Outside of NYC, where cabs are often dispatched from a central office the drivers usually get their new fares via phone. That's not great, but since too many cities make it illegal to flag down a taxi they have to do something.

But one of the arguments by the taxi drivers in favor of them using cell phones is that cabbies are better drivers than the population at large:

"And they say that as professional drivers, they are less likely to be distracted.

“Private motorists don’t accumulate the kind of knowledge and experience that a professional yellow cab driver does,,” said Bhairavi Desai, executive director of the New York Taxi Workers Alliance, which says it represents 11,000 of the city’s cabbies."

This raises a question I've long had, which is are professional drivers any better than non-professional drivers? I do think that taxi drivers cruising for fares are probably just as distracted (if not more) than if they were on the phone. Taxis get hit all the time swinging u-turns to catch a fare (How many times does that have to happen before 'knowledge' and 'experience' kick in?). But shouldn't taxi drivers and bus drivers be better drivers than everyone else on the road? They do drive around all the time, after all. That's a lot of practice. If they are better drivers then maybe behavioral exceptions could be made to improve productivity or make it a more pleasant job. I'm yet to see any anecdotal or published evidence that they are. Perhaps if the Taxi and Limousine Commission would keep track of accidents we could find out.
Posted by Unknown at Tuesday, August 04, 2009 1 comment: