New York City just released a cool new feature on their maps page. You can look at aerial photos from 1924, 2006 and 2008. It's pretty amazing how much the waterfront has changed. It's also pretty amazing how much of the built environment in the boroughs looks like it hasn't changed much. Of course, that is a baseball field on the Columbia campus. The other photo is of Lou Gerhig playing in that field in 1922 when he was a student.
Posted by Unknown at Wednesday, January 27, 2010 1 comment:

We've been trying to distract drivers for decades, but they keep driving more 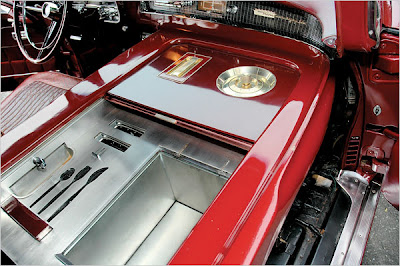 Photo from the NY Times

The recent proposals to place internet enabled devices on dashboards has rightly raised concerns about distracting drivers even more than they already are with cell phones and other devices. Distracted drivers are dangerous to themselves and others (not to mention the likely congestion effects), and the internet on the dash seems about as efficient a way to ensure that the driver doesn't pay as much attention as possible. But like many bad ideas, distracting drivers and making cars more appealing by making them less about driving has been around for decades.

Here is a Cadillac Marahani that GM built for the 1956 Motorama show that features a kitchen sink among other conveniences. I guess we're better off with people eating drive-thru rather than actually preparing their meals and cleaning up after themselves, but nevertheless the trend is clear: automakers have always devoted substantial efforts to making cars friendlier to use and more like an accessory of everyday life.

These efforts to improve the ease of use of cars has likely helped increase their overall usage. After all, how many people would be willing to endure their same commute if they had a three-speed manual transmission, no a/c and a lousy stereo? Probably not as many. The amount of really long commutes (1+ hour) grew substantially in the 1990s. Much of that increase can be explained by metropolitan structure and household changes, but perhaps some might be explained by the use of cell phones and other creature comforts that improved the overall quality of the auto commute. Driving for an hour is less onerous if you can do business, talk to your family or whatever else you want to do with a phone.

So we've been trying to distract drivers from the task at hand, and we have seen a concurrent increase in driving. Obviously what happens within the car is only part of the way driving has been made easier--look at street design, signage and other aspects of the infrastructure to see that the landscape favors making driving as thoughtless as possible. This makes me wonder what a 2010 Motorama would highlight. What are the cars of the future? I'd like to see self-driving vehicles. But those would have a verge large impact on our cities and towns. In any event, it seems that the improvements to autos are an under-appreciated but potentially major influence on travel decisions. I'll suggest that any new regulation about this starts by outlawing a kitchen sink in the passenger seat.

We will soon all drive flying cars underwater!

DARPA is pushing for flying cars again. They may just want to hire Batman because they want a submersible aircraft, too.

As for the flying car, apparently one of the problems the military has with their cars is that roads offer the enemy a guide for where the vehicles are going. (Maybe they should follow the slugs.) As DARPA explains:

DARPA said the TX will "provide the flexibility to adapt to traditional and asymmetric threats by providing the operator unimpeded movement over difficult terrain. In addition, transportation is no longer restricted to trafficable terrain that tends to makes movement predictable."

As for the underwater plane, don't call it a flying submarine:

Announced last year, the agency's Submersible Aircraft research project is exploring the possibility of making an aircraft that can maneuver underwater with the goal of revolutionizing the US Department of Defense's ability to, for example, bring military personnel and equipment to coastal locations or enhance rescue operations. DARPA said that the concept being evaluated here is for a submersible aircraft, not a flying submarine. It is expected that the platform will spend the bulk of its time in the air and will only spend short periods of time submerged according to the agency.

According to DARPA: "The difficulty with developing such a craft comes from the diametrically opposed requirements that exist for an airplane and a submarine. While the primary goal for airplane designers is to try and minimize weight, a submarine must be extremely heavy in order to submerge underwater. In addition, the flow conditions and the systems designed to control a submarine and an airplane are radically different, due to the order of magnitude difference in the densities of air and water."

I love the idea of flying cars (though I don't care so much about the underwater plane), and these DARPA competitions are a great use of incentives. Maybe the future really is up in the air.
Posted by Unknown at Friday, January 15, 2010 1 comment:

I only fly because it's cheaper than driving

Incentives matter. Even for rich people. Here's a guy who has a car (the Bugatti Veyron, which is really quite a car) that is so expensive to drive that he ships his car to the places where he wants to drive, then he flies there is a private jet so he can take a spin. Whoa! That dude has one big carbon footprint.

While this arrangement is bad for the planet, it's perfectly rational for an individual. In this case, it is cheaper to fly than drive the car (see link for details). It's sort of funny that the reason the car is so expensive to drive is because the tires and wheels have to be frequently tested for safety at 253 miles per hour, the top speed of the car and substantially faster than the landing speed of whatever plane this dude flies to his car.

This is an absurd example of travel choices, but instructive nonetheless. People respond to the price of travel, and will generally choose what is cheapest (which involves a variety of factors). I think the surprising thing about the Veyron owner is that all Veyron owners don't do this.
Posted by Unknown at Friday, January 15, 2010 No comments:

Exciting times for BRT in NYC

Last night the New York City Department of Transportation released their plan for Phase II of the city's BRT efforts. Exciting stuff! Improving bus service in NYC is a much bigger deal than many people realize as the subway system is radially designed around lower (and mid-) Manhattan. This rail network leaves many folks who need to travel to other destinations (such as eastern Queens to eastern Brooklyn) with poor service. In addition, the subway is not ADA compliant, so those with disabilities or who have trouble navigating stairs rely on buses to get around. The proposed SBS is a promising development for better transit.
Posted by Unknown at Friday, January 15, 2010 1 comment: