Elon Musk Has a Very High Value of Time

Rich guy and transportation visionary Elon Musk wants to pay cash money to accelerate the widening of the 405 in Los Angeles. Here is a story in the LA Times about this. He has already paid $50,000 to the cause and is willing to spend more. How many hours does he expect to save and what is his value of time? Should rich people pay more for capital expenditures? My favorite part is that he jokes that it is easier and faster to launch a rocket than build a road:


Musk quips that it's easier getting rockets into orbit than navigating his commute between home in Bel-Air and his Space Exploration Technologies factory in Hawthorne.

But the joke is on us as it is also cheaper to go to Mars than add a few lane miles. The 405 project will now cost about $1.1 billion according to the LA Times story, or about 50% more than the Mars Rover project.

In any event, Elon Musk should spend bit on a transport planning and policy course and learn all about induced demand. His investment in roads is not money well spent.
Posted by Unknown at Thursday, April 25, 2013 4 comments: 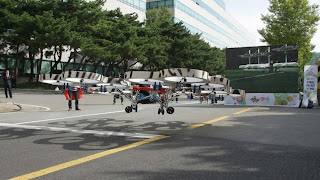 The case for (and against) public subsidy for public transport

David Levinson and I write about why and why not subsidize transit at Streets.mn. Here is one part:

Subsidy should be considered two ways: capital subsidy and operating subsidy. These are related, but different enough that they should be considered separately.
Capital subsidy can be direct or indirect (such as assistance with land acquisition), and these monies come from federal, state, metropolitan, local and sub-local sources. Traditionally capital subsidy has largely come from federal and state sources, though recently local sources through sponsorship (see the Emirates Airways gondola in London, for instance) or value capture have been used. Capital subsidy for transit expansion rarely, if ever, considers the effects capacity and network expansion have on operating subsidy, however. Since every transit system in the United States requires an operating subsidy, every service expansion increased the required operating subsidy and makes the financial position of transit agencies worse over the medium and long term.
Operating subsidies are from local, regional and state sources. The federal government placed severe limits on using federal money for operations in the 1970s, in part because most of the increases in subsidy went to total wages without any increase in productivity. The primary reason for operating subsidy for US systems now seems to be “that’s the way we do it here,” which is not a proper justification. Many of the cities around the world—and in North America if we look to Canada, where the Toronto system is required to maintain 75% farebox recovery in order to receive provincial subsidy for the remaining costs—have much higher farebox recovery, fewer operating subsidies and much higher ridership, which suggests a justification for less subsidy and higher fares: planning without prices leads to bad planning.


Streetfilms just produced a short video about the sorry state of signaling in Jackson Heights, Queens. About three of four turns are signaled. The Atlantic Cities has more. Failure to signal is not just a problem with BMWs, apparently, or limited to Los Angeles drivers. (A friend of mine in LA thinks drivers there don't like to signal because it gives all the other drivers an unfair advantage.) The general consensus seems to be that the signaling problem is getting worse, and this is bad for everyone on and near the road whether or not they are in a car. The good news is I have a solution.

As we move toward a model of autombility where drivers pay the marginal costs of driving and we increase the use of pay as you drive (PAYD) insurance with GPS we ought to be able to match turns taken in the auto with the use of a turn signal. If a car turns right onto a known street, the PAYD GPS device can--with some additional modifications to the car's turn signal system--detect that a signal was used. If a signal is not used, then the voice that all cars now have can pipe up and shame the driver to use their blinker. If the driver continues to not signal, then the insurance company can get involved and raise rates. If drivers do not like being watched like this, they can opt out of PAYD but pay for much more expensive average cost insurance (the people most likely to opt into PAYD insurance programs are those who drive the least. As the conventional pool shrinks the average costs to insure will increase as only bad drivers and those who drive a lot will remain.).

So through a bit of technology and PAYD insurance we can easily solve the scourge of blinkerless turns, except for BMWs, of course, which don't even have turn signals installed.
Posted by Unknown at Saturday, April 13, 2013 1 comment:

Beijing taxis will soon be more expensive for passengers. From China Daily:

Beijing transportation authorities confirmed that the municipality will adjust its taxi fare pricing system as part of the measures taken to increase access to taxis, Beijing News reported.
A hearing inviting all stakeholders will be held before releasing the new price plan, and the price increases will mainly go to taxi drivers, the paper reported.
Taxi prices have remained unchanged for years in the capital, causing discontent among taxi drivers.
It has become increasingly difficult to get a taxi during rush hours in Beijing, as many drivers prefer to suspend their business due to high operating costs, such as rising gas prices.

By keeping fares artificially low drivers had little incentive to work during periods of high demand. This situation is only one anecdote, but it does highlight that in many cases raising prices of transportation--road, transit, taxi, etc.--improves service. Should fares, tolls and fees be high enough to ensure lots of service or low enough so that service is difficult to provide?
Posted by Unknown at Friday, April 12, 2013 1 comment: