First, the four vehicles that are part of Alberto Broggi's project (previously blogged here) have arrived in Shanghai after their 8,000 mile journey from Milan. Here is an AP story in the LA Times about the project.

Second, here is a story from New Scientist that explains some of the features driverless cars may have. From the story:

Google says its major motivation is road safety. But there could be another imperative at work. The tech industry needs a fresh market to address after TV, computers and cellphones - and the car is being seen as that "fourth screen". Make sure the driver has nothing to do, and you've got a willing subject who's able to interact with a raft of lucrative in-car apps and search tools.

At the Future World Symposium in London last month, Tony King-Smith of Imagination Technologies, which designs graphics drivers and wireless microchips for smartphones and satnavs, said the idea of "making the in-car experience much richer" - and far closer to the apps used elsewhere - is driving tech firms to dream up novel dashboards. "People don't want any difference between what they see on their four screens," he told delegates.

The fourth screen technologies are in part sprouting out of the satnav technology already in place in cars. King-Smith says Nokia-owned satnav maker NavTeq is using his firm's graphics technology to develop rich in-car location-based apps - partly based on its own citywide lidar data it will begin acquiring in Europe next month.

Others suspect that this may be Google's long-term motive, rather than safety-related altruism: "If your car can drive itself, a lot of commuters would be freed up to do other things in the car - such as surf the web," says TechCrunch. A 50-minute commute could prove highly lucrative.

Third, Robocop has come to life! Here is a story about robot sentries guarding military installations and nuclear materials.
Posted by Unknown at Thursday, October 28, 2010 1 comment:

Flying cars on a wing and a prayer

A missionary in Ecuador has built a flying car to help indigenous peoples of the Waodani tribe travel to and from areas not served by roads. Here is the CNN.com story. Here is a story from Popular Mechanics. The parachute-laden craft just got FAA approval and seems to be a promising (though polluting) way to improve the lives of isolated populations.
Posted by Unknown at Wednesday, October 27, 2010 1 comment:

It's easier to avoid future emissions than reduce current emissions

Here's a bold statement: In the future, we will travel. We will travel either more, less or the same amount as we do now. How our future travel will change depends on economics, technologies, accessibility and opportunities.
To reduce carbon emissions and mitigate climate change, many people want to reduce auto travel and plane travel in the future. These folks support transit including high speed rail, biking and land use mixing to lower carbon emissions. Yet new construction for infrastructure emits carbon, too, offsetting some potential reductions. It is also hard to get people to change their behavior (drive less) without credible price signals and incentives. Maybe we will get such signals in time.
But the efforts to reduce future emissions are fraught with uncertainty. However, if we can avoid massive carbon emissions from new transportation technologies by, say, not letting people rocket off into space for pleasure, we are all better off. I, for one, think the burgeoning space tourism industry should be halted before it really gets started, and I suspected that launching lots of rockets into the delicate stratosphere would be especially bad for emissions. According to a new study discussed in Nature, my suspicions were right:

Climate change caused by black carbon, also known as soot, emitted during a decade of commercial space flight would be comparable to that from current global aviation, researchers estimate.

The findings, reported in a paper in press in Geophysical Research Letters1, suggest that emissions from 1,000 private rocket launches a year would persist high in the stratosphere, potentially altering global atmospheric circulation and distributions of ozone. The simulations show that the changes to Earth's climate could increase polar surface temperatures by 1 °C, and reduce polar sea ice by 5–15%.

"There are fundamental limits to how much material human beings can put into orbit without having a significant impact," says Martin Ross, an atmospheric scientist at the Aerospace Corporation in Los Angeles, California and an author of the study.

Private space flight is a rapidly maturing industry. Spaceport America, a launch site in Las Cruces, New Mexico, opened its first runway on 22 October. During the next three years, companies such as Virgin Galactic, headquartered at Spaceport America, expect to make up to two launches per day for space tourists. Meanwhile, the NASA Authorization Act passed by US Congress in September provides US$1.6 billion in private space-flight investments to develop vehicles to take astronauts and cargo into orbit.

I guess I think the industry is "growing," not "maturing," but that doesn't change the calculus here. This industry is promising Sunday drives to orbit, and while the cost per traveler are high (over $100,000 currently), the social costs of this travel are enormous when climate change is factored in. If this industry "takes off" then all of the efforts to reduce carbon emissions by us lowly surface transportation planners will be for naught. This is a case where we should avoid a new source of emissions as a method of reducing overall carbon in the atmosphere.
Posted by Unknown at Monday, October 25, 2010 2 comments:

The city of Beverly Hills has decided to license it's name and famous brown shield to a perfume manufacturer. So now you can smell like Rodeo Drive. From the LA Times:

The city of Beverly Hills and its partners plan to unveil three city-licensed perfumes Tuesday at a coming-out gala. With names like "Must Have" and "Iconic," the $120-a-bottle fragrances will feature the city's name and famous brown shield logo.

Retail sales will begin in department stores in January, and if all goes well, an entire line of Beverly Hills-themed scents and skin care products will roll out in the next year or so.

But don't worry. The land of high-end boutiques, celebrity sightings and five-star eateries isn't going bankrupt. An estimated $100,000 a year in royalties raised by the unusual licensing partnership will be pumped into the city's marketing department.

The perfumes were formulated in Switzerland, each characterizing an aspect of the Beverly Hills lifestyle, Walsh said.

When I was a grad student in LA, I lived in Beverly Hills and rode my bike everywhere. I wonder if that aspect of the Beverly Hills lifestyle is captured in a bottle.
Posted by Unknown at Tuesday, October 12, 2010 1 comment:

How should property values be accounted for in transit projects?

New Jersey Governor Christie put the new ARC (Access to Region's Core) tunnel on hiatus last week. While generally I am skeptical of paying the high costs of rail instead of other types of investment, I support the ARC project for a number of reasons. First, there is established demand for rail. I don't think these trains will run empty. Second, the Port Authority is picking up a lot of the tab. The Port Authority controls the tolls on the bridges and tunnels, so they can raise revenue if needed. This point is tempered by the possibility that the ARC tunnel may divert money from the NY MTA. I haven't seen these estimates, but I haven't looked very hard, either. Third, the Hudson river creates bottlenecks. There are few substitutes, and building bridge supports is a worse solution to building tunnels. Lastly, New Jersey is about to run out of land! They have to build at densities that are amenable to transit. The New York City suburbs are expected to grow by over three million people in the next 20 years. There simply isn't room for cars and parking. So I support the project.

However, one argument for the project that I don't like is that it will raise property values, as suggested in this column in The Architect's Newspaper and elsewhere. From the AN:

He will also forfeit the $18 billion increase in property values to many New Jersey communities (only one of the many benefits that an independent study by the Regional Plan Association forecasts).

But the idea that an increase in property values is an unambiguous benefit is incorrect. What New Jersey should do is pursue value capture strategies (see David Levinson's work for details) that take advantage of the increases in property values and taxes to help pay for the cost of the train and tunnel. By capturing the increased value those who receive the benefit are more likely to be the ones paying rather than everyone paying for benefits that accrue to a few.
Posted by Unknown at Tuesday, October 12, 2010 2 comments: 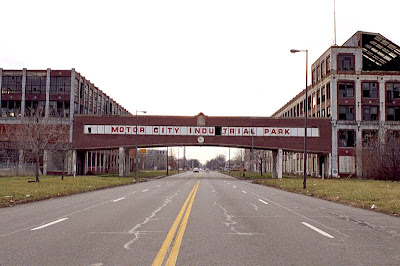 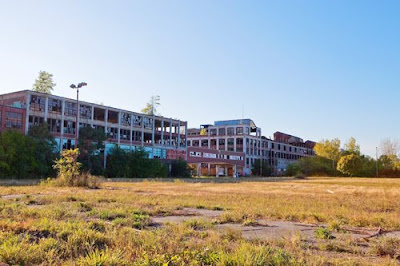 He has a point that the city doesn't know who owns the plant, and that's a problem. He is stretching when he claims that Packard was the most successful luxury car in America (Packard was most successful in the 1920s). But the real problem here is that the Packard plant is not a result of the decline of Detroit. The plant closed in 1956 and the company closed two years later. Detroit was growing and booming then, with well over a decade of growth ahead. In addition, the auto industry was just taking off at the time the plant closed. There are lots of things you can show to illustrate the decline of Detroit, but highlighting the Packard plant shouldn't be one of them. It closed during the height of Detroit's prosperity and mostly reflects the troubles of Packard. I suspect the only reason that people continue to highlight the plant is because of the (now) famous Motor City sign shown in the above photograph. At this point the old Packard plant is just one of thousands of abandoned properties that the city has to deal with, but the plant's closing did not cause the city's downturn.
Posted by Unknown at Monday, October 11, 2010 1 comment:

Congratulations to the lucky winners who used slime mold to determine railroad track placement. I actually thought this was pretty neat research. Here is an article about their work.

Here is the announcement from the Improbable Research site: