Public policy and technological innovation: the case of taxis

New York City requires that all taxis will be hybrid (or better) by 2012. The taxi lobby is fighting this, but one of the problems at hand is that there simply aren't enough hybrid vehicles available to meet the demand of the city ordinance.

Since taxis drive around all the time, they should be given priority for purchasing hybrids over regular personal users because greater reductions in fuel consumption and emissions will be realized. However, it is not clear if the city policy is flexible enough to meet the challenges out of the city's control, such as automobile production. And does the city's policy of going all in on hybrids create incentives to lock into that technology at the (potential) expense of alternatives such as electric cars, hydrogen fuel cells or new fuels? Maybe the city should commission Chevy to build enough Volts to replace the entire taxi fleet. That would accomplish the city's goals and perhaps help the Volt become a viable vehicle in the marketplace.
Posted by Unknown at Monday, October 13, 2008 1 comment: 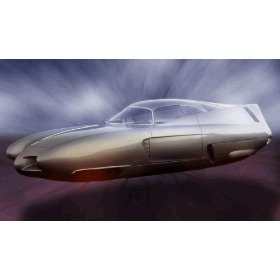 Amazon has a flying car for sale for $50,000 (plus about $5 in shipping, which is cheaper than the cost of flying it to you, I'm sure). Only one left in stock, so hurry up and buy it. It's not getting the best reviews, though, so maybe it's best to wait for the new model.
Posted by Unknown at Monday, October 13, 2008 1 comment:

The Long Island Motor Parkway was built 100 years ago and is considered the first road built exclusively for cars. It was privately built as a high speed toll way but never made any money.

Designing a road for the automobile first was a technological innovation that clearly changed how the structure of our transportation system. High speed, limited access roads are an important feature in our current networks, so much so that it's easy to forget that they are relatively recent.
Posted by Unknown at Saturday, October 11, 2008 1 comment:

The silver lining of the decline of American automakers

US automakers are in serious trouble. Hidden in the news over the past few weeks was a $25 billion loan to automakers to help them through tough times. That's $25 billion we're not going to get back. However, there are ways to make wise investments in the auto industry and improve our overall transportation system. There is no doubt that health care and pension commitments are problematic for car companies. Once Barack Obama had a great idea to trade a government takeover of some of the health care commitments in exchange for more efficient vehicles.

That would be a start, as Detroit seems frankly unwilling to put serious effort into increasing the efficiency of their fleets. The Chevy Volt will probably fail in what will be a crowded marketplace of hybrids by the time it is released. It will cost approximately twice as much as a Prius or new Honda Insight for a car that looks like a low end Chevy, and since the technology was rushed I expect reliability problems. Detroit is maddeningly determined not to bring their high quality and efficient cars they build and sell in Europe to the US, as well. It seems that GM could bring an Opel or two and Ford could bring their Mondeo and suddenly they have nice cars to sell.

But let's assume the US auto industry is in permanent decline. If this is the case, future transportation investments that do not favor the car will have minimal adverse effects on the industry, meaning the lobbying efforts to maintain automobile hegemony should fall on deaf ears. If we don't have an auto industry to protect and support, then we should dramatically shift our limited resources away from building public infrastructure that favors cars over all else.

This argument is simply that if auto manufacturing is no longer a dominant employment or political force we we should reprioritize our transportation policies and move towards a transport system that is more efficient, less energy intensive and helps ensure rights to mobility. There will still be plenty of companies making and selling cars. They just won't be American companies.
Posted by Unknown at Friday, October 10, 2008 1 comment:

Buy a piece of Detroit for less than the price of a gallon of gas!

This is only mildly symbolic, but you can now buy shares of the Ford Motor Company for a price substantially less than the cost of a gallon of gas. That's never happened before, and it doesn't seem good.
Posted by Unknown at Thursday, October 09, 2008 1 comment:

The replacement bridge along I-35W in Minneapolis opened ahead of schedule last month. That's good news. Even better news is the engineers took the replacement opportunity to install aesthetic devices built of concrete that neutralize air pollution. The special concrete works like a catalytic converter and is self-cleaning. Such an innovation bolsters the argument for major infrastructure investment by improving the overall health of the surrounding area. Highways are line source pollutants, meaning that the communities surrounding heavily trafficked roadways suffer from high levels of pollution and particulate matter resulting in increased rates of cancer, asthma and respiratory problems. When we rebuild our infrastructure for safety we should also consider the health and safety of people near the roads, not just on the roads.
Posted by Unknown at Thursday, October 09, 2008 1 comment:

If suburban sprawl causes obesity why are New Yorkers fat, too?

Many scholars are looking for a link between the walkability of sprawling areas to high rates of obesity. So far the evidence doesn't support the idea that sprawl makes people fat. In New York City, which is about as far from suburban as you can get, people are fat, too. So much so that the city government has banned trans-fats and requires calorie counts for all menu items at fast food restaurants.
But those efforts aren't enough, and now the city is spreading the work among the straphangers. The Department of Health is placing advertisements on the subway to reduce overeating (over-ordering to be more precise). There is no doubt that the city is walkable, transit oriented and has a low rate of driving. These factors have been in place for decades. Yet New Yorkers are fatter just like the rest of the country, and the city seems to think it has more to do with portion sizes and what we are eating than a lack of active living.
Posted by Unknown at Tuesday, October 07, 2008 1 comment:

Actually, this new study only says that people like angry looking cars. But since everyone seems angry these days the title probably applies.
I'm sure this goes into what is considered a feminine car or a masculine car. It was certainly the case that Hummers were successful in part because they had an aggressive look (SUVs were not included in the sample). It wasn't as though people who drive/drove Hummers were interested in showing the world a softer side. The image was a large part of the brand.
I do like the idea of further the research on car preferences by studying the issue in Ethiopia, where most people don't have cars and they certainly aren't subject to as much automotive advertising as in the US or Europe. It might be an actual field experiment (rather than quasi-experiment) in the social sciences!
Posted by Unknown at Monday, October 06, 2008 1 comment:

Cost 2 Drive offers an online service that calculates the per trip cost of auto travel based on distance and vehicle make. This is a handy tool for better understanding how much auto travel costs on a per trip basis, which is rarely considered by drivers. This service would be greatly improved if it allowed you to enter in your insurance costs, financing payments, parking costs (including employer paid), and other costs of auto travel, then calculate the costs based on a per trip and per mile basis.

I bet people would be shocked by how much each mile they drive costs.
Posted by Unknown at Monday, October 06, 2008 3 comments:

There is a new study that reports evidence that traffic accidents increase on election days. This is an unexpected phenomenon, and I'm not sure why it might be, but I have two main questions about the methodology. First, where are the accidents happening? Is there an uptick near the polling place or are the accidents more or less randomly distributed across town? It wouldn't surprise me that accident increase near a driving to a polling place, where a lot of people are headed who rarely go there. Polling places are sometimes hard to find. They also attract a lot of people walking to and from, so you'd expect an overall increase in pedestrian and vehicle traffic. Perhaps the volume of crashes is consistent with the amount of activity, it's just that there is more of it on election day. I suspect this explains quite a bit of the increase.

The second question is about who is getting into crashes. Elderly people vote in greater numbers than younger people. They also get in more crashes. Maybe this helps explain the problem.

Maybe New York (and a few other states) intuitively know about the dangers of driving on election day which is why they've made it a state holiday. Do the study results hold across states?
Posted by Unknown at Wednesday, October 01, 2008 1 comment: