In the latest Provocateur column in Reclaim magazine I argue that credits should be used to remediate inequity in transportation and pave the way for road pricing. How to create a fair and efficient pricing system is crucial. Today's comments by Lt. Gov Ravitch underscore the importance and timeliness of innovative financing solutions.

In the future we will all drive Ferraris

Driving a Ferrari is much more environmentally friendly than driving a Prius, with one caveat. This is only true if you compare driving the Ferrari a couple of times per month versus driving the Prius daily. So should we all drive Ferraris? Well, maybe some of us. Is trading daily economy for weekend waste a reasonable idea?

If James May is right, the car will be reduced to a hobby endeavor where we buy cars to drive for fun rather than utility. For those of us who think owning a Ferrari sounds pretty neat, this is a nice idea. Joe Eaton makes a similar argument in Slate. Eaton has started taking the bus and is devoting his savings to hopefully buy a Porsche.

From a transportation policy perspective, there is merit to this idea. As congestion gets worse and driving becomes more expensive less people are interested in doing it on a daily basis. Where transit is a reasonable options lots of people decide not to drive everyday. This doesn't mean that they give up driving altogether. It means that they are transit-savvy and willing to make their decision about how to travel based on a variety of factors, and make these decisions daily. A future where driving is consumed in moderation is much more achievable than one where driving is eliminated completely.
Posted by Unknown at Thursday, October 29, 2009 1 comment:

The Philadelphia Phillies and the NY Yankees are going to play some winter baseball starting this week. And for the first time since 1950 the Phillies will travel to NYC by train, though Amtrak is a popular choice for a lot of northeast corridor sports travel. While they made the choice because it is much faster and easier than flying or busing the same route, the reception the Phils got on the sidewalk suggests they may stick with the relative seclusion of airports in the future.
Posted by Unknown at Tuesday, October 27, 2009 1 comment:

Today's Columbia Spectator has a story about efforts to raze three city owned parking structures and replace them with underground parking facilities and affordable housing. The area needs affordable housing more than cheap parking, but the quotes in the story explain the problem:

“That’s a good idea,” nearby resident Marquez Aroldo said when he was told of the proposed project. “Most of the neighbors park in the street anyway. I don’t know who parks ... [in those structures].”

The lure of free parking gets them every time (most street parking in this neighborhood is free. Meters are only allowed on commercially fronted blocks, and the neighborhood is question is almost completely residential on east-west streets). The co-chair of CB7's transportation committee summed up the stalemate nicely:

“The bottom line is: some folks would like to see the garages maintained, as low-cost parking is rapidly disappearing from the community,” Andrew Albert, co-chair of CB7’s transportation committee, said in an e-mail. “Then, there are some folks who would like to see housing in their place, as there is a shortage of affordable housing in the community.”

The thing about this situation is that in Manhattan Valley, just south of the Columbia campus, there are transportation choices for people. Those who seek cheap parking are not likely the same folks who are looking for affordable shelter. It is the people who can afford to live in the neighborhood--a typical two bedroom rents for about $4000--who can afford to own a car, but only if parking is cheap or free. There is no defensible public policy that prescribes that parking has to be subsidized to make it affordable in this community. The area is served by three subway lines, multiple bus lines and has lots of stuff to walk to in the vicinity. The accessibility of this area make it an ideal place for more housing and a terrible place to maintain or replace parking. But to maintain or replace subsidized parking is the worst outcome. If the policy choice is between affordable housing or affordable parking, housing should win every time.
Posted by Unknown at Monday, October 26, 2009 1 comment: 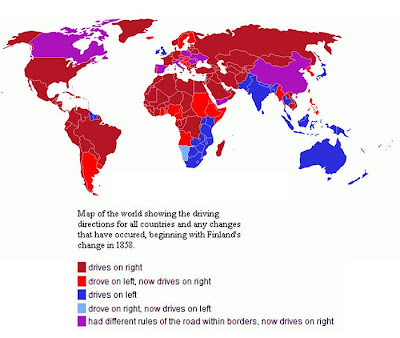 This map of the world shows what countries drive on each side of the road. I'm surprised at how many countries have switched sides, but it does seem that the trend is towards driving on the right (Sweden recently switched). Though why Namibia and Angola switched to maintain opposite driving sides seems a bit peculiar.
Posted by Unknown at Friday, October 16, 2009 2 comments: 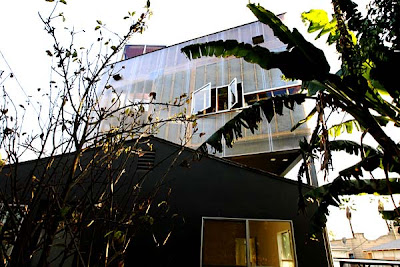 This week's featured property in the LA Times is a weird house in Venice, CA that looks like a modernist structure placed on an old bungalow. The owners wanted to tear down the old house and build from scratch, but if they did they would have had to put in the required garage for parking. The space devoted to parking reduced the available living space, so they just designed and built the new structure on top. Whether or not you like the design, it was a compromise solution because of required parking that the owners didn't want or apparently need.

Are the kids of today the drivers of tomorrow?

The LA Times has a piece that discusses a new survey by J.D. Power which suggests that today's American youth are less car obsessed that the kids of yore. This isn't that surprising since this trend has been evident for some time in Japan and, to a lesser degree, Western Europe. In developing countries there is still a strong desire to own a car as income increases.

I like that the survey looked as social media and networks to make inferences. I think the role of social networks and travel attitudes is poorly theorized and understood. Can public policy target a few influential people who will affect the attitudes and behavior of others through their social networks? That sounds a little clique-ish, but I think there is something to it.

Will the attitudes towards car ownership translate into greater transit ridership and other alternatives? If so, we should quickly invest in alternatives to driving. Or does ambivalence point to a greater problem for luxury cars, as people will still buy cars but more for utility than social status.

I think people will still buy cars, but these newish attitudes about vehicles bodes well for the Prius, Insight and other efficient cars that are not luxurious. Most hybrids and other efficient cars are now simple (except for the drivetrain) and well built, and are generally much cheaper to buy and operate. If utility is the primary factor I suspect price will be a much larger concern for buyers. And if price is a concern, people will buyer smaller, more efficient cars.
Posted by Unknown at Thursday, October 08, 2009 1 comment:

Making it fun to walk

Volkswagen has an initiative where it is trying to get people to walk and take the stairs more for health benefits. This video shows what happened when they turned a staircase in to a piano. People took the stairs! 66% more according to them. There is no question that urban design matters. How to work it into policy is less clear, but these inexpensive ways to make walking fun and give a unique status to train stations (or neighborhoods) are well worth pursuing.
Posted by Unknown at Thursday, October 08, 2009 1 comment:

All hotel keys should function as transit passes

Bangkok's Chaophya Park Hotel has implemented the best innovation in hotel keys since they started locking doors. The keys are also valid as one-day transit passes. This is a great idea, and goes a long way toward making the transit system more friendly to visitors (and as I recall the system is pretty easy to navigate). Every hotel should do this.
Posted by Unknown at Thursday, October 01, 2009 1 comment: