Update: Here is a link to the LA Times story on the new California High SPeed Rail Authority report. The cost is now $98.5 billion (estimate when California voters passed Proposition for $9 billion in funding = $43 billion) and the construction time has been extended by 13 years to 2033 from 2020. One new option it to run the entire train on elevated tracks over the 5 freeway between Los Angeles and Bakersfield. See the below video about a similar design in San Jose to see how that might look.


Original post:
November 1 is a big day for California's high speed rail plans. The California High Speed Rail Authority will release a report that will update the business plan for the proposed system. Here is a news report from the Sacramento Bee about what is expected. It will not be surprising if the new report is the beginning of the end for the HSR system. Costs are higher than expected, and private investors are unwilling to invest speculatively in the project. Private investment was supposed to play an enormous role in financing and building the system, but without revenue guarantees there is no interest from the private sector.

Even if the system gets built, it won't be pretty according to this new video (via David Levinson and Systemic Failure):


I doubt anyone will want to live or work anywhere near that infrastructure, especially with trains running every five to ten minutes as promoted by the HSR supporters.

Tangentially related, here is a story about the struggles of the Ontario airport. A HSR connection will not help the problems detailed.

How the IRS Screws Transit Riders and Rewards Drivers

It is the season of choosing benefits for 2011 for many people, and that means that we get to pour over details of the commuter benefits section of the IRS tax codes.* For 2011, many transit riders get screwed. In 2010 workers were able to pay for up to $230 per month of transit fares with pre-tax income, thus reducing their taxable wages. There was also a $230 allowance for parking. Starting in 2011, the IRS will only allow $120 in transit fares to be paid with pre-tax income, yet parking remains at $230. See IRS Publication 15-B for details (pdf).

In many cases, and certainly for most low income workers who rely on transit, $120 per month is more than adequate for a transit pass. The lowest income workers are also unlikely to take advantage of the tax break for various reasons, so perhaps this tax change isn't that big of a deal. But for people who rely on commuter rail $120 does not cover there monthly fares. For someone in the New York area, this change in the tax code will cost them about $360 per year in taxes (if they pay about 25% of wages in taxes, which is probably low). Is that enough to change behavior and cause these workers to switch to driving? Perhaps if their employer provides parking. But more importantly, these tax expenditures reflect the misplaced priorities of US transportation policy, which I will summarize in haiku since that seems to be the thing to do this week:

Parking should be free/
Priority to drivers/
Poor alternatives


*It's not obvious to me why we have commuter benefits in the tax code. It seems the value of commuting is that you earn money at a job. No one is making decisions at the margin about whether or not to have a job based on commuter benefits, but people do make locational and transportation decisions based on the distorted economics of these tax-free benefits.
Posted by Unknown at Friday, October 28, 2011 1 comment:

Bit City: Transportation, Data and Technology in Cities is next week on November 4. The event is free (though please register through this site) and offers a chance to hear leading scholars discuss current research and issues of GPS data, crowd-sourcing, legal issues of privacy and contracts, and how new technology can change the way we approach transportation planning. Please come if you can. If you can't, we will be livestreaming the event. Check the website for details.
Posted by Unknown at Thursday, October 27, 2011 1 comment:

Views of the Future

Microsoft has a new ad promoting its version of the future. (Watch below.) It is striking to me that this future is a lot like the present, just with different gadgets that let us do the same thing we do now marginally better.

How well will Microsoft do in the prediction game? Probably pretty well since they are likely working on all of the ideas they feature. AT&T did really well predicting the future way back in 1993:


And Apple was extremely prophetic in 1987:


But do these views of the future get anyone all that excited? Some of these ideas presented are potentially revolutionary, but most are just doing the same thing a bit better. My larger point, however, is that these visions of the future focus on marginal improvements rather than big ideas. Even though the military is still working on flying cars (get this week's update here and the 1958 update here), the future depicted by technology companies is pretty much a future of going to more meetings, which is not exactly a space-age concept. We're not really even space-age anymore, for that matter.

Here is a bold vision of the future from Disney in the 1950s:


And here is what AASHTO says now:


AASHTO sounds sensible and boring, and will be well served by the productivity gains from Microsoft, I suppose.

So what is exciting for the future? Flying helicopters with your mind, of course! Clever researchers at the University of Minnesota have developed software that allows the user to fly around the Minnesota campus by thinking hard while wearing a special hat. Here is the paper, and video is at this io9.com link. Let's see more views of the future with mind control, autonomous cars and other technologies that fundamentally change the things we do (so we can do different things) instead of marginal improvements of what we already do. After all, we're still waiting for the telecommuting revolution to kick in.

Reinventing the Wheels: Monday Oct 31 at The New School 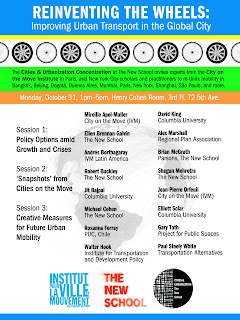 On Monday, October 31 I will be presenting at "Reinventing the Wheels: Improving Urban Transport in the Global City." See photo for details, but the panels look great.
Posted by Unknown at Wednesday, October 26, 2011 1 comment:

If a Bridge is Stolen and No One Notices Does It Make a Sound?

I think we can all agree that if you steal a bridge and no one notices within an week we probably didn't need the bridge very much. This is (was) evidence of overbuilt infrastructure. At least there is less to take care of now. Click the link for details:
$100K Steel Bridge Dismantled, Stolen From Rural Area - Pittsburgh News Story - WTAE Pittsburgh
Posted by Unknown at Friday, October 07, 2011 1 comment:

London has a major problem with roadworks, apparently, and there are renewed calls to charge the offending utilities rent for any road lanes taken out of service while performing tasks underground. Christian Wolmar explains:

Back in the early 1990s I remember attending press conferences about
proposed new legislation that would make the utilities pay rent for the
lanes that put out of use, thereby inducing them to carry out the work
faster. To no avail: the utilities protested, blocking any attempt to
enforce the legislation.
Now we are back to the starting line on that idea, with the Government
consulting on “lane rental” and promising legislation. We’re told we might
have a system in place in London by next spring.


This is an interesting idea that seems like it could generate high levels of popular support and real benefits in terms of less disruption and new revenue.

"The Social Life of Small Urban Spaces" is Now Online

One of my favorite planning related films (The Towering Inferno being another) is now available via YouTube. It is still useful for planning techniques and understanding public space. If you haven't seen it you should watch it.
Posted by Unknown at Monday, October 03, 2011 2 comments:

Estimating Value of Time from Choosing to Travel by Acela

I'm going to Washington, DC this week, so I had to book a ticket to get there. Flying costs about $250, but that doesn't include time and money costs of getting to the airports. Ultimately, flying is too expensive and takes too long so I take the train when I go to the capital once or twice a year. I usually take the Acela, too, but I think I am over-valuing my value of time. Select Northeast Regional trains will get me to DC in 3 hours and 12 minutes for a $78 base fare. The Acela will speed me there in 2 hours and 49 minutes for $222. (Fares are each way.) So I am paying $144 to save 23 minutes (this suggests I would pay $375 to save an hour), a slightly nicer seat and a frustrating wireless experience.

This assumes, of course, that the Acela is on time, which is not always the case. Last time I took the Acela it was 45 minutes late getting to my destination, more than wiping out any time savings, and I was not offered a refund for the extra expense. When I rode the TGV from Paris to Lyon this summer, the train was 45 minutes late and there were nice people waiting on the platform in Lyon with envelopes to use to send in your ticket for a refund. This happens a fair amount with the TGV and they are well equipped to handle it.  (Of course, the Japanese Shinkansen was tardy by a cumulative .6 seconds for 2010 so no one worries about refunds there.)

In any event, the Acela premium is steep, and it reflects high values of time (and the fact that someone else is picking up the tab).  My train better be prompt!
Posted by Unknown at Monday, October 03, 2011 1 comment: