A dissenting view on the dangers of cell phones while driving 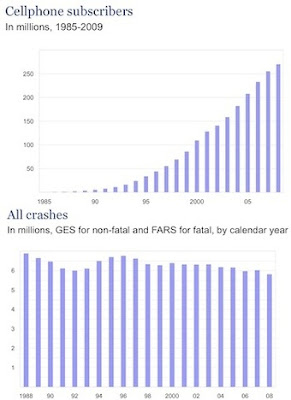 Jalopnik interviewed the President of the Insurance Institute for Highway Safety about his somewhat contrarian position that cell phone use does not lead to more crashes. The above graphic illustrates the meat of his argument, which is that cell phone use continues to grow (the top graphic) while crashes are declining slightly (the lower graphic). His point is that if cell phones and texting were so bad we should see an increase in the number of crashes. Here is how Adrian Lund explains why he doesn't think that crashes would be even lower if there were no cell phones:

Jalopnik: Isn't it possible that crashes and fatalities would be declining at a greater pace if it weren't for cellphones?

Lund: That is possible. These aren't random experiments that we're carrying out. I will say we think that's an unlikely explanation because the bans aren't having any effect on crashes. We did see a decrease in cellphone use, but we didn't see crashes go down. Cellphone use goes up, and cellphone use goes down, and there doesn't seem to be any reaction in the crash statistics we see.

In addition to variations in cell phone use, there have been great strides in making drivers more alert to their surroundings. As Lund explains:

We've also had GPS coming into cars and a lot of other technology, and we don't see an increase in crashes. We need to be a little humbled by this and reevaluate the way people are using this technology in cars. We need to remember that distracted driving didn't begin with cellphones. Go back to the 1970s, when you looked at crashes the proximate cause was driver error, and usually it goes back to the driver not seeing something, which is distraction.

The DOT is absolutely right that distracted driving is an issue, and we need to address it. Our problem is when we look at laws, they don't seem an effective strategy for addressing it. We are hopeful some crash avoidance technology will be more successful.

Let's face it: Why do we have forward collision warning systems and lane departure warning systems? It's because drivers get distracted, and the idea of these systems is to get drivers attention back on the road when they wander into dangerous situation.

So there are off-setting factors. Perhaps there is some moral hazard at play where safety improvements encourage more dangerous behavior and distracted driving. I agree with Lund that most state laws are ineffective, but that's because they are hard to enforce and people can still talk on their phones through an earpiece. Just as Lund wonders why there hasn't been a decrease in crashes, I think we should also ask why haven't crashes gone down more considering all of the safety improvements made over the past decade or so.