NO TAV: Anarchists Debate the Merits of High Speed Rail

This past weekend I was in Milan, Italy and I saw lots of the this image: 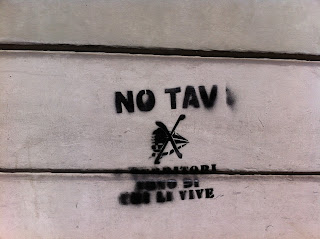 It is the work of the NO TAV movement, which is a social movement opposed to the proposed high speed rail line between Turin and Lyon. I saw similar images in Lyon, France last summer. Here is a summary of the movement. This is the crux of the opposition:


The simple principle behind the movement is that a new high speed railway line in the Valley is completely useless and not needed, its only purpose being the profit of the many private companies that have shares in it. The NO TAV think that the current railway line between Piedmont and France is more than sufficient, considering that traffic in the area has never been incredibly high. More importantly, the construction of the line would utterly and irreversibly destroy a huge part of the Susa Valley, causing not only an environmental but also an economic and social disaster, with businesses closing down and villages being completely disfigured or disappearing.

High speed railway lines in Italy are considered to be of “strategic interest”, which translated from political bullshit language means that the law allows this type of works WITHOUT consulting the local population and institutions whatsoever. At a time of economic collapse such as Italy is going through, the works require billions of Italian taxpayers’ money, at the expense of primary services like education and health. It would mainly be construction and other private companies profiting from it, but when finished and in use, the low demand for the line would end up making it a loss-making burden on the taxpayers. Like in Rossport, Ireland, the locals’ concerns and proposals are being completely ignored in the name of the only Modern God: money.

The NO TAV came up with their own plan for the area which would include:
- changing the production and distribution processes to decrease transport of people and goods, especially on long distances
- supporting local sustainable trades instead of big industries
- creating or improving local means of sustainable and green transport for workers and students
- supporting and incrementing the use of the already existing local railway line

This is where thinking about political spectrum as a circle rather than a line is useful. NO TAV is opposition of high speed rail from the left, but they recently were joined in protest by neo-fascists. Then, of course, some anarchists started having a debate about the relative merits of high speed rail. I am not trying to send trolls their way. I want to highlight the odd politics of property rights, high speed rail, opportunity costs and other factors that are rife across all political persuasions when it comes to high speed rail. Support for and opposition of HSR is not because of one's politics, but rather a host of other reasons. Where European opponents are convinced that it is big money forcing HSR on people, in California supporters are convinced that opponents are on the take (while the train is on the dole). In truth, support or opposition is about values and priorities. But let's leave any fascists out of transport policy.

Now this one is what I've been looking for. Would be giving you credits on the way how you deliver this great insight. Such an interesting story. smoke spice