Revisiting the bad old days of the NYC subway 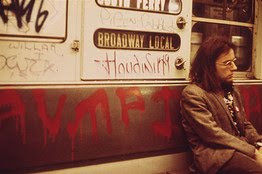 In light of the new proposals from the New York MTA to raise fares--including raising the caps on unlimited ride monthly passes, which benefit higher income riders--the Wall Street Journal revisits one of their articles from 1988. The late 80s were a period when transit use and overall population in New York were in decline. The subway system was perceived as dirty (it was) and dangerous. Here is the beginning of the story where the problems and improvements are described:

To most people here, the New York City subway system is a cesspool — a dark, dangerous, filthy place where homeless people live and others venture because they must. Stations and platforms smell. They are used as latrines, in part because the city has padlocked most public restrooms. New Yorkers will tell you that train service stinks, too.


So it’s easy to understand, then, why Charles Marto was rather confused when he descended into the dimly lighted subway station at noon one day recently and figured he had walked into yet another transit screw-up.

Trains were passing through the station thick and fast. “I thought there had been a breakdown and the trains were backed up,” says Mr. Marto, a legal assistant in mergers and acquisitions at a Wall Street law firm. He certainly didn’t expect to see all those trains in the middle of the day.

The astonishing thing he was witnessing was an improvement in service, one of the many always-surprising changes for the better in the subway system. Mr. Marto had happened onto “MidDay Business Service,” the Metropolitan Transportation Authority’s effort to persuade New Yorkers of a certain age and median income to take trains instead of taxis between Wall Street and midtown Manhattan as they go about the city on business. Promoters think it’s the perfect way to get to a power lunch. And they’ve spent a million dollars since the end of February touting the idea.

In these days of shrinking budgets and expensive capital improvements, I think it is important to remember how far the transit system has come in the past 25 years. Many New Yorkers have no recollection of the bad old days of the subway. Without careful management and planning, transit can decline substantially in terms of usage, service and reliability. It has in the past, and will likely again in the future just because these things often are cyclical to a degree.

Unlike most cities, New York had little choice except to improve existing services. In most US cities, transit improvements focus on new infrastructure and capturing new riders rather than making the existing service better. Even though NYC is unique with regard to density and subway provision, perhaps there are broader lessons to learn about investment priorities for better transit choices and city desirability.
Posted by Unknown at Tuesday, July 20, 2010