The future of airline security 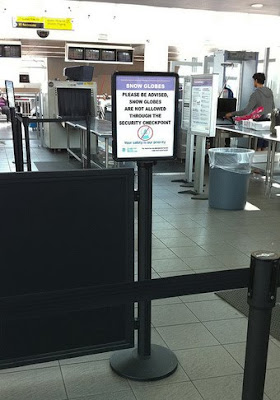 One of the reasons many people think high speed rail is advantageous over air travel is because of the different levels of security utilized at train stations versus airports. Paul Krugman makes this argument here. Yet it is important to think about what security will be like in 25 or so years once new rail systems open. There is no reason to think that security will look anything like it does today. Although traveler identification systems such as Clear have shown mixed results, the security theater in the U.S. will change.

James Fallows notes a change that occurred at the Citibank headquarters in New York City:

A reader who works in the main Citibank building in Manhattan writes to report:

My office building is the world headquarters of Citibank. In the wake of 9/11 they decided they needed increased security and so have required all bags and packages to go through an x-ray machine. You could be carrying Dirty Harry's revolver in a shoulder holster under your jacket,, or ten pounds of plastic explosive taped to your chest, but your attaché case had to be screened. Amazingly, after nearly nine years of doing this, they stopped this week, although the announcement from building management reassuringly told us that the x-ray machines are in storage and can be wheeled out at a moment's notice.

Within my experience, this is just about the only occasion in which security theater has not been subject to a one-way ratchet effect -- once a "security" measure is adopted, no matter how foolish it is, no one ever has the courage to discontinue it. Is there hope that the broader society will follow this brave beacon?

Security measures change, and there are many people who have strong interests in making airline security better. Perhaps airline security will remain relatively time consuming and ominous compared with train travel in 2035, but it seems equally likely that there will be a convergence of time and convenience costs between the two modes.
Posted by Unknown at Wednesday, July 07, 2010