Long Beach Has Everything. So What's the Matter?

Last week I spent a few days in Long Beach, California at a conference focused on urban freight. Good stuff. I like Long Beach a lot, and always have. But as I was wandering around downtown I was struck by a couple of things. First, where was everybody? Whenever I travel I have to adjust my expectations for traffic and pedestrian activities far away from even my relatively quiet Manhattan neighborhood. Yet Long Beach was empty. I realize this was mid-week in early October, but it was striking, and leads to my second thought: Long Beach has everything. It's like SNL's Stefon was an urban planner for the city. As near as I can tell, Long Beach has at least one example of every major trend in planning over the past few decades: 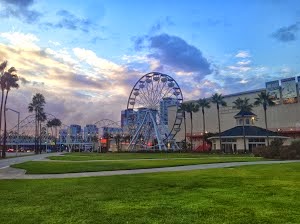 Plus other trendy things like loft apartments and brew pubs. Yet while I walked around downtown there was hardly any action. Buses park overnight on the transit street (see GIF at top, which was taken at about 8pm on a Wednesday night at what should be a hot part of town). Street life was non-existent. An unusual amount of the retail space was occupied with fitness trainers, which suggests that there isn't much demand for the space overall. And for all of Long Beach's efforts they didn't even make California's Most Livable Cities list!

Chasing planning trends is no guarantee of success for a city. I'm sure everything Long Beach pursued was justified by someone in good faith. However, Long Beach performs somewhat worse than the region in terms of unemployment and other economic indicators. Whatever they have done hasn't been much of a success. All cities should be wary of trendy planning. Perhaps Long Beach can be a case study (this would be a good thesis if any students are reading). Of course, it is harder to predict what is trendy planning and unlikely to be transformative, though there is also a lot of research about the effectiveness of the types of planning efforts Long Beach pursued that gets ignored.