Los Angeles opened the first phase of the Red Line subway system 20 years ago. Here is a story from The Source about it. A midst the celebrations, how should the success of the rail investment be judged? Here are a few data points to consider. 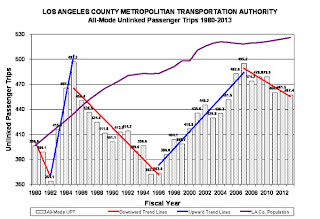 So if ridership isn't a clear success, then what about development and land uses? Los Angeles finally got around to rezoning the area near Red Line stations last year. This can certainly be viewed as a failure of the city to not coordinate zoning codes with transit development, and maybe the city missed out on potentially dense development. This is far from certain, however, and it is more likely that the demand for rezoning came from regional growth pressure rather than simply transit access. If transit access were the primary influence on rezoning it would have occurred long ago.

As we celebrate the 20th year of Red Line service the clear successes are scarce. Transit ridership is falling below population growth, and transit service is supplied inequitably in too many areas of the county. Land development has not happened magically even though the population and economy expanded. Yet there are certainly anecdotes where positive outcomes exist, and perhaps in another 20 years it will all seem worthwhile. Of course, we probably shouldn't have to wait 40 years for the pay off from these types of investments.
Posted by Unknown at Monday, February 04, 2013