Transit Referendums Have Always Been Popular 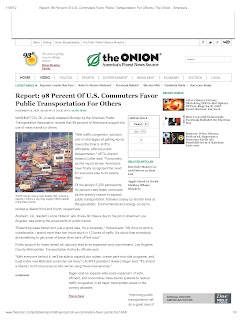 There were lots of transit and transport related referendums on ballots this year, and about 80 % of them passed. This is essentially par for the course for these types of measures, and nothing to get excited about as some type of shift in priorities or sentiment by the public. The past few years have seen similar rates of passage for transit and transport projects (see here), and these measures generally have broad support across the electorate. See this recent report from NRDC for a snapshot of current support across party lines, which has been fairly steady over time, and see The Onion piece above for a 12 year old joke about how popular transit is. While many vote to support transit, most vote to support transit for someone else.

Where officials seem to be cannier in their approach is they realized that bond measures are more popular than tax measures. Here is the abstract from a paper by Dixit, et al.,:


Transit is an integral part of a sustainable transportation system in any
region. Proposals for transit initiatives that are brought to referenda
include a funding vehicle, either tax based or bond based. A tax-funded
proposal imposes the cost on the present generation of residents, whereas
a bond-funded proposal delays the burden to future generations. The aim
is to investigate whether the success of proposals in referenda is related
to the use of taxes or bonds for funding. This question is investigated
with the use of data from 111 transit referenda held in the United States
from 1999 to 2007. It was found that proposals that use taxes for funding
are less likely to pass than those that use bonds.

In broad terms, transit ballot measures are popular because other people using transit will help make driving easier--e.g. people support transit as a form of congestion reduction as they expect their personal harm from congestion will decline after other people switch modes--and future generations will pay for the improvements. Such a deal.

Pushing costs onto future generations is nothing new. For instance, New York's Metropolitan Transportation Authority has long pursued a bond strategy driven largely by public demand for services now and repayment later. See this paper by James Cohen for details or this working paper of mine here.