The LA Times reports on protests against the development policies of Los Angeles Metro. From the story:

More than 200 protesters marched through Union Station on Thursday afternoon, banging drums as they passed train platforms, loudly demanding more community say in how the region's transit agency manages and develops property along its rapidly expanding rail network.
The demonstration, which did not affect transit services, was held as the Metropolitan Transportation Authority continues its plan to aggressively pursue several new rail lines in various areas of Los Angeles County, as well as housing and other developments around them.
Speaking at the rally, Sunyoung Yang of the Bus Riders Union said Boyle Heights, east of downtown, has been particularly affected by Metro development. "Over the years there has been a net loss in affordable housing," she said. "People have been displaced."

The article provides some details about affordable housing that has been built, including  1,222 affordable units near rail transit stops. While affordable housing is a absolutely a good thing--people need quality places to live--a larger question is whether the regional transit provider is the proper agency to supply it.

The protesters also are upset about big-box retail and gentrification:

Still, protesters, whose march wound from a park near Union Station to Metro headquarters and then on to Boyle Heights, accused Metro of seeking to bring big-box chain stores into neighborhoods, a change they contend speeds up gentrification and pushes out local merchants.
Roger Moliere, chief of property development for Metro, said the agency is not likely to partner with big-box stores because they don't fit with his agency's mission of transit-oriented development, partly because those types of stores rely more on customers arriving by car.

There are a couple of issues to unpack here. First, there are clear benefits to big-box stores that must be considered against the costs. In general their prices are much lower than independent stores, which is good for consumers and especially for low income consumers, and they tend to employ more people at higher wages than independent stores. (See Richard Green's post for a quick summary and links that help support these statements.) Second, big-box stores can thrive without everyone driving to them if other options for travel exist. Fixed route transit, however, is not a viable option for many big-box store visits. Taxis, jitneys, car share and other transit modes that fall between auto ownership and fixed route transit are critical for the economic and social well being of communities, in particular communities that are low income or have a penchant for low rates of auto ownership. In New York a few big-box centers have opened in the past few years, all with generous amounts of parking spaces that are almost always empty. Instead, liveries and for-hire vehicles line up at the stores. Rides are $8 plus $1 per mile. Considering the cost savings on goods, this is a net benefit for the communities. Here is a photo of the sign outside of Target in Harlem: 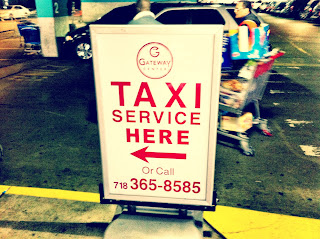 And here is a shot of the parking spaces (these photos were taken on a Saturday afternoon): 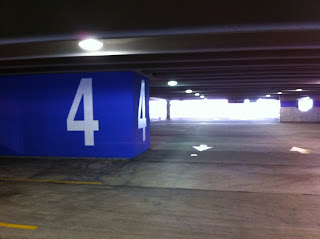 Getting back to which agency should address housing policy, Metro has a particular transit technology--rail--that they are using to shape housing and development policy. Would the outcomes be any different if housing and development policy was addressed by HUD or a local agency, then that agency focused on a variety of available transportation technologies or policies to serve the needs of their constituents? . Perhaps, like in NYC, non-transit agencies would simply require lots of parking. This is plausible if not likely. But maybe they would consider multiple transportation options such as taxis, cycle facilities or walking. Part of how people think about these issues is what their goals and preferences are. Transit advocates will likely want more transit and argue that development should follow that investment. (Transit leads development.) Housing advocates may argue that housing and jobs should come first and then affordable transportation options should be provided. (Development leads transportation.)  Monopoly issues, investment incentives and biases, financing constraints and other institutional factors complicate these situations. It is not obvious to me that either approach is optimal or clearly superior.