Sales are up, but almost 60% of parking spaces are still available 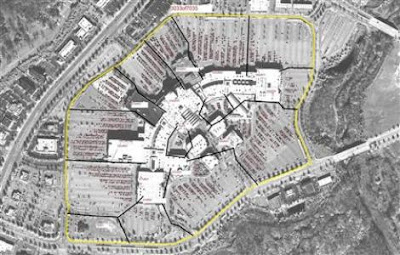 Satellite photos of parking lots suggest more people shopping on the Friday after T-giving. Those photos also reveal that the parking lots average 35% occupancy since September. That's 65% of parking spaces left unused, on average, and keep in mind that all of those empty spaces are required by the zoning code. That's why minimum parking requirements are so problematic.

(Reuters) - More Americans will be out shopping this year on Black Friday -- or at least that's how it looks from outer space.

This year 35 percent of parking spaces have been filled since mid-September on average, compared with 31 to 32 percent the previous two years, according to the data analyzed by Thomson Reuters.

**This post was updated to clarify Friday parking was not specifically observed.
Posted by Unknown at Sunday, November 28, 2010