Self driving cars are closer than you think 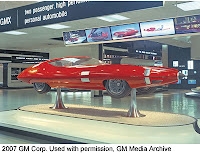 This week at the Consumer Electronics Show, the head of GM will talk a bit about the company's plans for self-driving cars. What GM is proposing seems a bit less audacious as the DARPA Challenge vehicles, which are completely automated. The GM cars will be dual mode, where they are driven normally and the auto-pilot is turned on for certain travel segments such as on the freeway.

It strikes me that moving towards automated driving is the most desirable way to improve our transportation systems. For political, financial and practical reasons I don't think that developed countries will completely replace existing infrastructure and replace it with new infrastructure for new modes of travel. I also doubt that transit will ever be able to replace a large share of personal travel, largely because transit will never match the convenience and overall mobility and accessibility offered by cars. Transit is very good at certain types of trips, such as short trips and many commute trips. But we don't really design local area transit systems, rather we design regional systems which have a limited potential ridership and effectiveness for reducing auto use.

Other proposed solutions to our transportation issues often involve brand new infrastructure. Light rail is an example of this, as is Personal Rapid Transit. That these proposals call for new facilities isn't surprising as that is traditionally how new transportation systems are deployed. Streetcars were replaced by buses, County Roads by Interstates, etc. In many ways the new systems and facilities made sense because they replaced aging and inadequate systems. How to deal with aging systems is a very important issue, but my short answer is that at some point we have to re-orient some of our transportation investment into existing system maintenance.

Getting back to the automated cars, their biggest advantage is that they takes advantage of the existing roadways. They will be able to more efficiently use the existing space, thus reducing congestion. I'm skeptical that there will be energy and environmental advantages from a fleet of automated cars. I think energy and environmental benefits are largely a result of the car size and engines. If we automate a bunch of Smart Cars, great. If we automate a bunch of Suburbans, well, the results will be better than if the Suburbans are driven regularly but that's about it.

The last point to make is about financing. Previous attempts to automate driving have focused on automating freeways. This approach is expensive and requires, again, replacing the entire infrastructure (or at least adapting it), then replacing the vehicles so they are able to take advantage of the technology. Automating the cars only is a much better and faster way to achieve the same results, and the extra costs are borne by the consumer of the automated cars. There will still need to be some type of reserved road space for the automated cars, but perhaps this is a way to introduce variable pricing on some of the existing roads.
Posted by Unknown at Monday, January 07, 2008

I guess it's safe to say that we should be prepared for anything that will happen in the future. Back in the old days, I never would've expected that I'll be able to live long enough to see the development of self-driving cars.