Getting the Dependent Variable Right: Trips versus Distance Traveled

There is no question that in the United States driving is declining, and that Vehicle Miles Traveled (VMT) have also declined in absolute and in per capita terms. There are questions as to why, however.  It’s important to understand why and how travel is declining, and we have decades of research that suggests that people consume travel in economically predictable ways by consuming more or less based on income. USPIRG and others are reluctant to view economic reasons as the main cause of the observed decline in distance traveled.  I don’t think distance is a particularly good dependent variable on which to analyze economic factors, though, as annualized distance traveled doesn’t really tell us anything about the economic value of travel. A better metric for understanding the economic factors associated with declining travel is trips, especially trips by purpose. What the data show is not just that people are driving fewer miles, they are also taking fewer trips.

Personal travel has some economic characteristics that are especially relevant here. Personal travel is a normal good in that as income goes up people will consume more of it. This also means that as income declines people will consume less of it. Conversely, transit, certainly as practiced in the US, has many characteristics of an inferior good where demand declines as income goes up (remember I’m talking about inferior goods as an economic concept. This has nothing to do with the actual quality of transit service.). This is because people replace transit trips with auto trips (or walking trips in certain areas such as parts of Manhattan) as they can afford it.  Now, perhaps since there are lots of new rail systems that were designed specifically to attract people who would otherwise drive we shouldn’t view transit as an inferior good in all situations. I suspect this is true in some cases, but not in most.

The other economic characteristic of personal travel is that it is a derived demand, and distance traveled is a function of the trip demanded. This means that, by and large, people travel because of what they want to do at their destination: work, shop, eat, school, etc. Some of these destinations are close and some are far, but rarely do people decide how far to travel before they decide where to go. As economic conditions for individuals and households change, especially decline, they are likely to make fewer trips out of the home, which will lead to less distance traveled. This is especially true if the areas declining economically are sprawled metros. If trips are declining is sprawling areas then this will lead to unusually large distance traveled declines in surprising areas.

An an example of the economic value of travel, if a person drives to get a hamburger the value of the trip (utility) is derived from eating the hamburger, not the distance the restaurant is from their house. If someone drives two miles for a hamburger the utility of the trip is nearly identical to driving one mile for the same hamburger, as the marginal cost of the additional mile is small. It certainly isn't the case that the two mile trip has twice the economic value as the one mile trip.

A more accurate way of looking at the economic influences of personal travel is to look at trips, in part because personal travel is mostly non-work and non-commuting. Looking at data presented in Commuting in America III highlights some of the issues with trips. (The .pdf is secured so copying the tables is more time  consuming than I will take time to do here, but you can read the tables in the report.) Table 1-1 shows the relations between person trips and person miles of travel. Only 18% of distance traveled is due to commuting. Figure 1-2 shows the trips per capita by type for the past few decades (all data from NHTS/NPTS). The number of work trips is fairly stable at just over .5 per capita per day. Personal business and social trips are where the increase in travel happened, where these now consume over three trips person per day, which is about doubles from the late 1970s. The CiAIII report also shows that work trips have declined as a share of overall travel (by trip and total distance) substantially.  According to the 2009 NHTS average annual miles traveled getting to and from work have declined since their 1995 survey (Table 5 below and available at the link above.) The number of commute trips has declined in the same period, too, from 676 per person per year to 541. Moreover, the average distance traveled per trip (for all trips) increased slightly from 11.7 miles to 11.9 between 2001 and 2009. 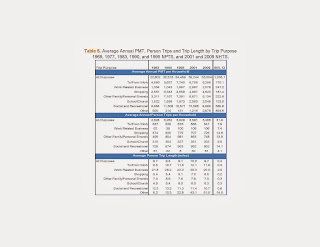 Table 8 in the 2009 NHTS report shows person trips by household income, and it shows that as income increases the number of trips taken increases (trips as a normal good). Table 11 shows miles per trip type, and it shows that the total number of commute trips per person has declined along with miles traveled. In addition, all trip types have declined in number per day. Looking at Table 6, the average vehicle trip length is largely the same between 2001 and 2009. (Check the link for the tables as I don't want to make this post longer than it already is.) Taken all together, it seems likely that the decline in distance traveled is due to a decline in the number of trips taken. I argue that this is an important distinction when we think about policy.

If we think that people are doing all the travel that they used to but are now traveling shorter distances, then the natural policy response is to physically rearrange our cities. I suspect this is a reason that the VMT declines are so compelling to urbanists who prefer compact development, as their desired urban form happens to be useful policy in this case. Yet the decline is distance traveled is less associated with compact physical structure of cities and more associated with fewer trips taken. One way we know this is that metro areas were continuing to sprawl as distance declined.  If anything, the decline is distance traveled is associated with the suburbanization of employment, shopping, entertainment and recreation. There is evidence that this is the case. Ultimately, while some downtowns and town centers are doing very well at attracting new residents, the total number of people moving to these locations is fairly small (maybe a couple of hundred thousand across the country so far, and that’s a generous estimate) and not enough to offset the decline in distance driven. Nor are people substituting transit for driving in any great number. In some cases, it is absolutely happening, but most of the driving that is no longer happening cannot be reasonably substituted to transit.

Here are some reasons, all of which have economic justifications related to the economic characteristics of personal travel mentioned above. These are also global conditions, which fit with observed declined in travel in developed countries around the world.

There are good reasons to believe that automobility hasreached “peak utility,” but this doesn’t necessarily mean that other modes will be the beneficiaries. It may just mean that people don’t travel as often.
Posted by Unknown at Friday, December 06, 2013

Personal trip could be costly. I think last minute travel deals are providing best offers. I recommend you to book from there. Save money and travel smoothly.
Birmingham airport cheap parking
cheap airport parking

I would definitely love the trips with distant travelling, thanks for sharing the difference between them.
manchester airport parking deals
cheap airport parking