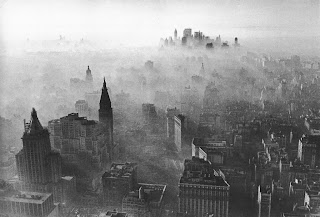 The NY Times has a story about Chinese households moving away from the largest cities to smaller cities in part because of lousy air and water quality. This is no doubt happening, though data is scarce to  assess to what degree. This does highlight an explanation for urban spatial structure and sprawl in the United States that tends to be forgotten or ignored, which is the role of the environment. As an example of the state of the literature on sprawl, here is a link to a short piece by USC's Richard Green in which he identifies nine key causes of sprawl. I agree with all of these, but I also suspect that desire for clean air and water played a large role. The photo above is of Manhattan in 1966. If the air was still like that I doubt we'd have any $100 million penthouses as you wouldn't be able to see anything. Central cities used to be the center of industry, and that led to lousy local environments. Leafy suburbs were a solution to the dirty air and polluted waterways. Now that polluting industry has left central cities they are more desirable.

Cities in the 1940-1960s (and earlier, but I am thinking primarily of post-war sprawl here) were poisonous places. Toxic air was extremely common and manufacturing industries made things worse. For many reasons it was better and easier to move the people away from the pollution than move the pollution away from the people. It is reasonable to expect that one of the reasons that people did favor sprawling residential land development is precisely because of the known negative externalities associated with living near industry.

Another consequence of lousy air and water is that cities responded by strengthening their zoning codes and land use regulations separating uses. Consider that much (most? I'm not sure.) of the new residential development happening in central cities is happening on land that was rezoned away from industrial uses to residential uses. As an example, the eastern part of downtown Minneapolis was recently rezoned from industrial uses to residential (Update: to clarify, mixed uses are allowed, including residential.).  Links here. Downtown business interests desired that land remained zoned industrial for decades so that development would concentrate in a few skyscrapers, which is why the area is dotted with parking lots. Now that the zoning has changed development is occurring, in part because living downtown is no longer associated with polluted air and water. (As an aside, such development would likely have occurred after the rezoning regardless of a new football stadium, but I'm sure the stadium will get all the credit. The Metrodome didn't "create" any development because the zoning wouldn't allow it.)

So local zoning for industry was a reasonable reaction to major environmental problems of the time, but the regulations are outdated for today's economy. This will take time to fix. Perhaps all zoning should have a sunset clause where it expires after 30 years so the codes become more adaptable to economic conditions.

The main reason we have clean air and water is because of federal regulations installed under the Nixon administration, and a main reason we still sprawl is because of local regulatory responses to environmental externalities. But overall US cities, and cities around the world, were able to improve their environments so that people enjoyed them. From the standpoint of household preferences, it may be that clean air is preferred over any particular type of home. If true, this means that the observed preference for single family suburban homes may be misdiagnosed as the true household preference is (was) for clean air and water. Now that clean air and water are universal in the US, household preferences prioritize other aspects, such as housing type, amenity value, or other factors. There is little research on the role of environmental qualities for household preferences for suburban or urban living. I don't think the data exists to historically test this proposition for the US, but we can measure these effects in contemporary Chinese cities if we can collect the right data.

If it turns out that environmental factors are a non-trivial cause of sprawl, then federal environmental regulations may be effective pro-urban policies that complement other urban policies. In turn, the local responses of stricter zoning because of environmental pollution were ineffective and ultimately damaging to metropolitan spatial structure and sprawl, which work against other public interventions. Clean air and water are public goods that require global (or national) responses.