New York City is about to launch Citibike bike share, and apparently some people are upset about the bike racks in certain locations. See here and here for examples. Many bike share supporters are quite derisive about any complaints against bike share, but concerns about implementation are to be expected. In fact, for most new transport policies the period immediately prior to implementation is when the public support is at its nadir. 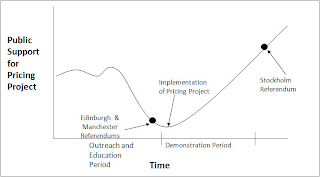 The above figure (taken from a FHWA report) shows the popular support for congestion pricing at various stages of implementation. This is an instructive example of the phenomenon at work. A strong bias toward the status quo exists, which means that the challenge of change is not necessarily one of ideas but rather one of implementation. Once a controversial project is installed, then it represents the new status quo and everyone gets on with their life. Mike Manville, Donald Shoup and I wrote about the political calculus of congestion pricing (link), and the same lessons apply. When a project is initially presented support runs high (in most cases politicians will not introduce projects they expect to be unpopular), but as details are offered support wanes. Then, just before implementation, support craters because of status quo bias, loss aversion and other factors. Once implemented the incentives to fight against the project diminish and support grows.

The consternation about the bike share infrastructure is predictable and will be short lived. Popular support for bike share will follow a similar u-curve as above. There is no need to demonize people who raise concerns.
Posted by Unknown at Wednesday, May 15, 2013