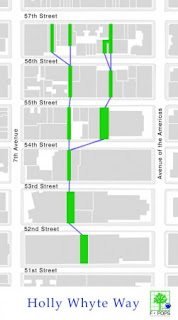 The New York Observer reports on a plan to create the "Holly White Way" along 6 1/2 Avenue through midtown Manhattan. Holly White (also known by William Whyte, the article seems to misspell his last name) studied and advocated for better urban spaces, especially the privately supplied public spaces required through the zoning code. These public spaces in midtown are underutilized, and part of why they are underutilized is that the spaces are not connected. The new plan is to connect the network of spaces through new pedestrian connections. This will effectively make a pedestrian thoroughfare through the area:

What if the city built a huge public park in the heart of Midtown,  stretching half a mile over seven city blocks, about as big as the first phase of the High Line? What if that park already existed, dating to the 1980s, largely ignored but for the most knowing New Yorkers?
“We’re basically building a new pedestrian avenue in the heart of Midtown, one of the densest, busiest places on Earth,” Transportation Commissioner Janette Sadik-Khan said during an interview last week.
...

Now, in an effort to create safer connections between these spaces while encouraging their use and also unclogging the avenues along the way, the Department of Transportation is creating a series of traffic interventions to link up these disparate shortcuts. The result should be somewhere between the Brooklyn Heights Promenade (though the Brooklyn Bridge may be more apt, given the crowds) and the Winter Garden at the World Financial Center. It should be a nice place to pass through, but also possibly to stop for a coffee or lunch, without fear of being mowed down on the way back to the office.

And for good measure, you can't possibly threaten any of the existing parking spaces in the city. Fortunately:


The plan is currently parking neutral.

That's a relief. We certainly don't want to lose a parking space to benefit the thousands of people walking around.
Posted by Unknown at Tuesday, March 27, 2012