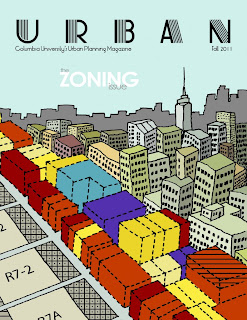 Students from Columbia University's Urban Planning Program publish Urban magazine and have produced an excellent new edition that focuses entirely on zoning. Since the 1961 New York Zoning Resolution turns 50 this year, New York planners have spent a lot of time thinking about the potential and limitations of zoning. In the magazine there are articles on how zoning works and many pieces on specific aspects and consequences of zoning.
You can read the edition here:
http://blogs.cuit.columbia.edu/urbanmagazine/files/2011/12/Fall2011_ONLINE.pdf

There are three articles I want to highlight, though the entire magazine is impressive. First, Eric Goldwyn explains how Zuccotti Park came to be through innovation in the zoning code that created privately owned public spaces. The second article is by Sara Beth Rosenberg, and she writes about the long history of vending from metered parking spaces. This may sound mundane, but the city is struggling to enforce parking regulations as businesses are setting up shop curbside. Curb parking is the best real estate deal in New York and metered spaces are now used by food trucks, delivery vehicles, shipping companies and other commercial users. These uses bring many of the externalities that the zoning code sought to minimize.

The third article of note is "Density is not Destiny" by Jake Schabas. Jake challenges the perceived importance of density for robust transit service. Using examples from Zurich and elsewhere, he makes the case that service quality matters more than planners generally think. He also nicely summarizes the decline of U.S. transit systems in the middle of last century and why there wasn't a grand conspiracy against transit.

It’s a really informative article. I am happy that you shared this useful info with us. Did you know the best company for NYC Airport Limousine? The one you are checking out right now! Carmellimo Limo Airport NY