The endless traffic jam in Beijing 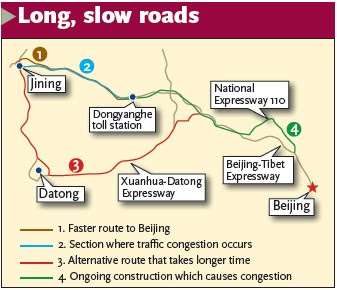 (via Cary Greene)
There is a traffic jam outside of Beijing that has entered it's 9th day, and it is expected to continue for another few weeks according to the Global Times. A road under construction has brought mostly freight traffic to a halt. As one driver explains:

Wang, driving from Hohhot to Tianjin in a coal truck, had been on the Huai'an section for three days and two nights.

"We are advised to take detours, but I would rather stay here since I will travel more distance and increase my costs," Wang said.

"The number of roads from northwest China to Beijing are limited," he complained, asking "Why should I pay the toll fee?"

Between this driver's explanation of costs and the wonderfully bizarre above graphic it appears that Chinese truck drivers (and those paying to ship goods) have value their time very little and road tolls with few substitutes are unpopular. Just like in the US! It also sounds like there aren't any weigh stations enforcing axle weights to preserve the roads. Let's check back in late September and see if the roads have cleared as expected.
Posted by Unknown at Monday, August 23, 2010