The railroads gave us time zones 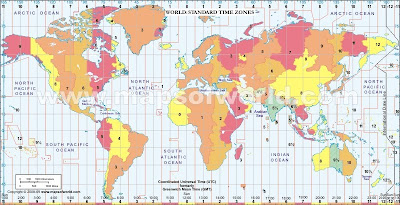 Timezones are one of those public policies that people don't really think about a lot, but like all policies, someone had to argue for them. This story in the NY Times about the Grand Central clock room nicely summarizes how it was the railroad operators who wanted time zones for scheduling purposes and pushed to get the U.S. Congress to legislate them in 1883.

I have no idea when time zones were adopted elsewhere (though China only has one), but this map of time zones around the world clearly demonstrates how time zones are allocated politically as much as geographically. I wonder what a bipartisan compromise on time zones would look like.

(Image from mapsoftheworld.com)
Posted by Unknown at Thursday, September 17, 2009