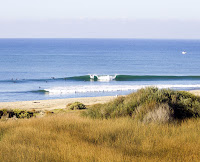 There is a new road proposed to run through San Onofre State Park in Orange County. As can be expected, there is great opposition to the proposal. The opposition is somewhat weakened by the fact that the road does not go through a residential community. Rather, the negative effects of the road would be felt within the state park and along the surf breaks, namely Lower Trestles, one of SoCal's mosts famous breaks.

I generally feel like we should better manage the infrastructure we have before we build any new infrastructure, but a lot of the opposition to the new road emphasizes that it will be a toll road. I think this approach is counter-productive in the long run. If tolls were implemented on the existing highways traffic flow and speeds would greatly increase, thus reducing the need for new construction. Unfortunately, implemented tolls on existing roads is much harder politically than getting them on new roads. The opposition should be focused on the problems from the road, which are significant, and not on the fact that there will be tolls.

photo courtesy of CraigCoppola.com
Posted by Unknown at Friday, February 01, 2008